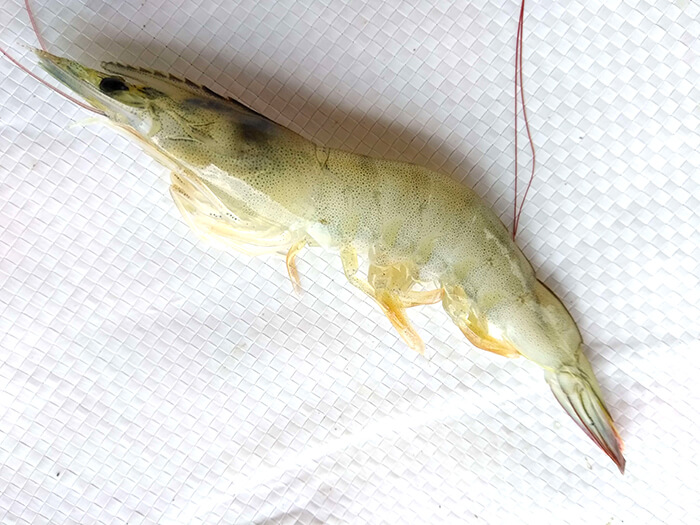 Aquaculture of Pacific whiteleg shrimp has rapidly expanded because of the species’ fast growth, tolerance of high stocking densities, disease tolerance relative to other species, and availability of domesticated strains. Pacific whiteleg shrimp are a euryhaline species capable of surviving over a wide range of salinities and temperatures; however, optimal growth is achieved at salinities of 10 to 15 g/L and temperatures ranging from 23 to 30 °C (Bisesi, 2007; Rosenberry, 2002). Pacific whiteleg shrimp are typically produced in ponds. Production systems may be extensive, semi-intensive, or intensive with the type of production dependent on the stocking density, feed input, water management, and technical knowledge/skills required to maintain operations. In an extensive system, post-larval (PL) shrimp are stocked at low densities ranging from 5 to 10 PL/m2; comparatively, in semi-intensive and intensive systems stocking densities vary from 20 to 30 PL/m2 and 200 to 250 PL/m2, respectively (Kungvankij et al., 1986). Moreover, inputs (i.e. feed) differ significantly between the different production systems. Extensive systems rely on the natural production of the ponds (e.g. micro-algae and phytoplankton), whereas semi-intensive and intensive systems are dependent on compounded aquaculture feeds (Tacon, 2013).

In contrast to farmed fish where feeding can be observed and adjusted based on the response of the animals, farmed shrimp are not directly visible during feeding. Consequently, feeding must be carried out according to recommended daily rates based on expected growth, body weight and estimates of total shrimp biomass present in the pond (Tacon et al., 2013). Feeding trays consisting of a square or circular shaped plastic mesh are commonly used as an assessment tool to facilitate feeding. For example, in Viet Nam, farmers typically use 2 to 4 feeding trays spaced equally over a 4,000 to 5,000 m2 pond to monitor feed consumption and adjust the feeding ration. Daily feed is adjusted based on shrimp size and the amount of feed remaining on the trays from the previous feeding (Hung and Quy, 2013). The nutrient specifications for L. vannamei vary somewhat depending on life stage with starter feeds containing 34 to 36% crude protein and grower and finisher feeds containing 32 to 34% crude protein.

The majority of Pacific whiteleg shrimp is sold frozen and peeled with either the head on or off. The largest importer is the United States (3 billion USD).